You’ve saved money all your life. Or, maybe you sold your business after investing years of hard work. You’ve chosen the smart path and have a comfortable nest egg as you set sail into retirement.

But always be on guard! Criminals seek to trick you into willingly handing over your hard-earning savings.

I hope I have your attention.

Elder financial exploitation quadrupled from 2013 to 2017, according to the [[https://files.consumerfinance.gov/f/documents/cfpb_suspicious-activity-reports-elder-financial-exploitation_report.pdf Consumer Financial Protection Bureau]].

Specifically, these activities originated from unknown scammers, family members, caregivers, or someone in a nursing home. They involved more than $6 billion, with an average loss of $34,200. But in 7% of these instances, losses exceeded $100,000.

According to the [[https://www.fbi.gov/news/stories/results-of-elder-fraud-sweep-announced-030719 FBI]], more than 2 million seniors were victimized in the past year.

Even [[https://www.fbi.gov/news/stories/former-fbi-director-william-webster-helps-foil-fraudster-030719 former FBI Director William Webster]], 95, was targeted in 2014.

Webster was promised $72 million and a new car…if he paid several thousand dollars to cover shipping. Ultimately, the caller was arrested. But not before his relatives in Jamaica had successfully scammed other U.S. citizens out of hundreds of thousands of dollars.

It won’t happen to me

If you’re thinking, “This can’t happen to me,” think again. The best and brightest can fall victim to a seasoned swindler.

While scams are only limited by the criminal imagination, the U.S. Senate’s Committee on Aging highlighted some of the more common scams in a report entitled, [[https://www.aging.senate.gov/imo/media/doc/2018%20Fraud%20Book.pdf Protecting Older Americans Against Fraud]].

Included are the top nine scams. Please familiarize yourself with this list. If you have any questions, we would be happy to talk with you.

Scammers impersonating IRS officials claim you owe money and pressure you to settle immediately. If victims make an initial payment, they will often be told that new discrepancies have been found in their tax records, which must be satisfied with another payment.

Don’t fall victim! The IRS will never call you to demand immediate payment. If there is a question about your return, you’ll receive a letter, and there is a process to appeal any disputed amount.

Robo-dialers can be used to distribute prerecorded messages or connect the person who answers the call with a live person. IRS scammers may use this tactic.

Robocalls often originate overseas, and numbers are usually spoofed to hide their true identity. Have you recently received a call from someone whose phone number has your prefix? If you don’t recognize the number, it’s likely spoofed and not local.

The FTC has warned not to give out personal information in response to an incoming call. Identity thieves are clever. They often pose as bank representatives, credit card companies, creditors, or government agencies. They hope to convince victims to reveal their account numbers, Social Security numbers, mothers’ maiden names, passwords, and other identifying information.

Unsure who you are talking too? Just hang up the phone.

Sweepstakes scams continue to claim senior victims who believe they have won a lottery and need only take a few actions, i.e., sending cash to the con artists in order to obtain their “winnings.”

Sometimes, it’s best not to answer a call if you don’t recognize the number. If it’s a friend, they’ll leave a voicemail message.

The goal: get your voice print saying, “Yes.” Then, the scammer charges your credit card using your “Yes.”

If asked, don’t respond. Just hang up. If you get a call, don’t press 1 to speak to a live operator to be removed from the list. If you respond in any way, it will likely lead to more robocalls–and more scams.

“Hi Grandma/Grandpa, guess who?” When you respond, “This sounds like ‘Sally’,” the fraudster will say “she’s” in trouble and needs money to help with an emergency, such as getting out of jail or paying a hospital bill.

If you send cash, expect “her” to call you again, asking for more cash. Victims who were duped later said they had wished they had asked some simple questions that only their true grandchild would know how to answer.

Whether a computer pop-up screen or an alleged caller from Microsoft, scammers claim your PC is infected with a virus. Please note, Microsoft will never call you to inform you they have detected a virus.

Do not give control of your computer to a third party that calls you out of the blue. Don’t give them your credit card.

More and more Americans are taking to the Internet to find a partner. While some find love, others find financial heartache.

Be wary of individuals who claim the romance was destiny or fate. Be cautious if an individual declares his or her love but needs money from you to fund a visit. Or claims cash is unexpectedly needed to cover an emergency. These are huge red flags.

This was the most common type of consumer complaint in 2016, with nearly 400,000 complaints.

Placing a freeze with the major credit bureaus helps prevent credit cards or loans from being taken out in your name. If you believe you are a victim, call the companies where the fraud occurred, place a fraud alert with the credit bureaus, and file a report with your local police department.

Always remember, grants are made for specific purposes, not because you are a good taxpayer.

Do not wire funds to cover fees for the so-called grant.  Government grants never require fees of any kind. If you do, you’ll likely get more requests for additional unforeseen “fees.”

And, don’t give out bank information or personal information to these swindlers. Scammers pressure people to divulge their bank account information so that they can steal the money in their account.

Always remember, you are in control. When in doubt, hang up.

That is how you protect yourself.

Attached is a list of useful tips. Place it near your phone. These cards can be a useful tool to help protect you against swindlers. 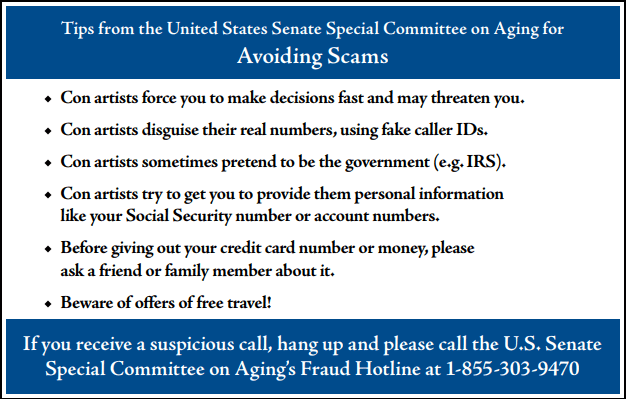 My mission is to help my clients reach their financial goals. I am proactive in my recommendations. But sometimes, a good defense is the best offense. It’s heartbreaking to hear stories of theft. I don’t want you to become a victim and another government statistic.

The first rate cut since the financial crisis

Going forward, guidance was vague. While Powell left the door open to at least one more cut, it’s not assured.

The rate cut isn’t in response to a faltering economy. The  [[https://www.federalreserve.gov/newsevents/pressreleases/monetary20190731a.htm Fed said]], “Economic activity has been rising at a moderate rate.” I don’t dispute this characterization.

Yet, in an 8-2 decision (the dissenters wanted to keep rates unchanged), the Fed said it cut in order to “insure against downside risks from weak global growth and trade policy uncertainty.”

Last month I commented, “Falling interest rates in 2001 and 2008 failed to stem the outflow out of stocks as economic growth faltered. And, rising rates between late 2015 and September 2018 didn’t squash the bull market. During the mid-1980s, mid-1990s, and late 1990s, rate cuts by the Fed, coupled with economic growth, fueled market gains.”

That’s not to say that a rate-cut cycle in the middle of an economic expansion didn’t aid the market’s rise, but the economy and corporate profits have historically been the most important factors that determine the longer term direction of stocks.

Steady as she goes

Gross domestic product, which is the broadest measure of economic activity, slowed from Q1’s 3.1% annualized pace to 2.1% in Q2 (U.S. BEA).

While soft business spending is probably a reaction to the global slowdown and uncertainty caused by trade tensions, consumer spending rebounded sharply.

Job growth is solid. First-time claims for unemployment compensation are low, the unemployment rate is below 4%, and consumer confidence is strong.

If we average Q1 and Q2, growth is a respectable 2.6% as we head into the second half of the year.

Maybe, just maybe, consumers aren’t paying attention to what’s happening on the trade front and are much more focused on their own situation.

Control what you can control.

Your plan should consider your time horizon, risk tolerance, and financial goals. There is always risk when investing, but I tailor my recommendations with my clients’ financial goals in mind.

I hope you’ve found this article to be informative and helpful. If you have any questions, concerns about this article or would like to discuss any planning or investment matters, please feel free to email Eric@ElmTreeCapital.com or give my office a call at (781) 236-0802. I'm happy to talk!